The politically supported plan to replace fossil fuels with renewable and bioenergy resources was initiated in the mid 00 decennium. The goal with the shift towards renewable bioenergy sources is to mitigate climate impact by reducing greenhouse gas emissions from use of fossil fuels. Growing bioenergy crops can also lead to an increase in soil carbon storage which further reduces the amounts of greenhouse gases in the atmosphere. Biomass suitable for bioenergy use can be found in forestry as felling residues, and also from agricultural land as short rotation willow, straw and haulm. The use biomass material in power plants can produce both electricity and heat. Tree stumps comprises about 20% of the biomass of a tree, and can be seen as a significant bioenergy resource. On the other hand stumps in the forest also have values for biodiversity and socioculture. Harvesting a stump can also have potentially negative effect on soil and water in the ecosystem. Furthermore, there can be differences in fossil fuel consumption when harvesting a stump depending on geographic location and distribution of stumps in a felling site. The decision whether to harvest a stump has to be based on often conflicting criteria with different stakeholders. The different criteria have different types of values, not directly comparable to each other.

A collaboration between researchers at SLU, Skogforsk and KTH has made possible the creation of a decision support tool implemented as a computer-based model. The main stump wise data source is data from the tree harvester including the stumps position, diameter, biomass and energy content. Furthermore, the tracks from the harvester were used to construct the terrain roads within the site. GIS data from different sources was used to get important objects around and within the site, such as water, conservation values and connecting roads. Laser scanned elevation data over the site was used to calculate slope and topographic wetness index, important to estimate the trafficability. Values for each stump within four criteria was estimated using scientific research findings and expert judgements. Each criteria expresses a score value, 0 to 1, which is translatable to a harvest decision at the threshold value 0.5. Using multi criteria decision theory a harvest och not harvest decision was calculated from these four criteria. The four different criteria could be weighted together to a final score to be used to produce a suggested harvest decision. 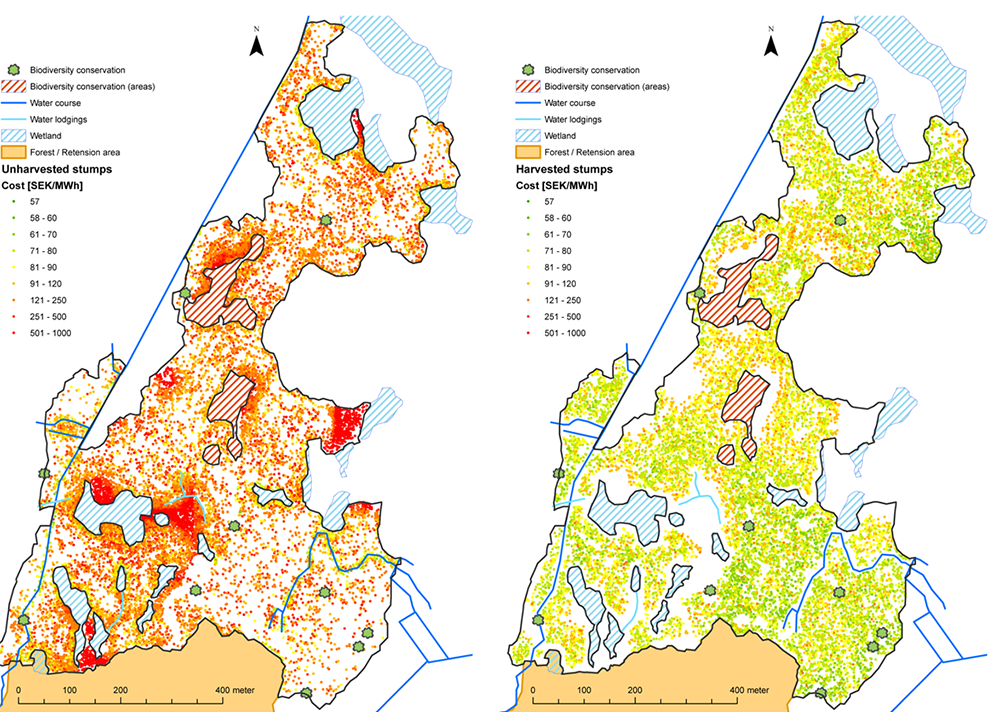