– for improved performance and safety 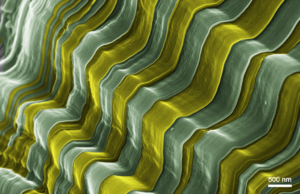 Despite the widespread use of lithium (Li)-based batteries, there are still many problems relating to their low energy density and loss of performance during cycling, leading to short lifetimes. The prospect of using Li metal anodes has allured the scientific community during decades, as Li electrodes have ideal properties for increasing the energy density bottleneck of current Li‑ion chemistry. However, it was early realized that Li electrodes had serious stability issues, making them a safety hazard. Their instability and gradual loss of capacity relates to the growth of Li dendrites and mossy formations during battery cycling.

Prof. Leif Nyholm and his group have recently developed a method to attain, in a reproducible manner, dendrite-free, two-dimensional deposition of Li during battery cycling (Fig. 1). The method could easily be adapted to real-life batteries, thus holding a significant promise for the development of stable metallic Li anodes with high energy density.

The Electrochemistry and Corrosion Group at Uppsala University