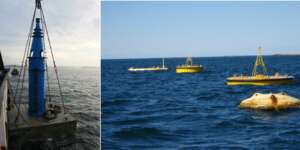 One of the largest challenges of today’s society is how to guarantee the energy demand in the future in a safe and sustainable way. Ocean waves provide a renewable energy source with high potential to contribute to the global electricity production with minimal environmental impact. Uppsala University is at the forefront of wave energy research. Our research group is one of the largest worldwide and has developed, deployed and studied full-scale wave energy converters since 2002. The key principles of the wave energy concept developed at Uppsala University are simplicity and reliability. Our research covers the full system, from the hydrodynamics of the waves via the energy conversion in the generator to the grid connection.

All energy conversion, also from renewable energy sources, affects the environment in some way. The wave power plants may impact the local ecosystem, and the local environment may also affect the power plants with, for example, biofouling. It is important to study the environmental impact at an early stage of a project and adjust eventual negative impact on the ecosystem. In the Lysekil project, the environmental impact of the wave power park has been studied continuously since the start of the project. This has been done, for instance, by studying the artificial reef effect of 30 buoys attached to foundations on the seabed, and by studying the sound impact, and changed sedimentation combined with water movements.

The Uppsala University wave power concept is based on simplicity and functionality to ensure a robust and effective system for converting wave energy to electricity in the grid. The main idea is simple: a buoy at the sea surface is moving due to the motion of the waves, and connects to a direct-driven linear generator where the motion is converted to electricity. Forces in waves can be very large, especially in storms, and survivability is a key issue in wave power technology today. It has previously been recommended that, to shelter the wave power plant from the extreme destructive powers of the ocean, as much as possible of the wave power plant should be concealed underneath the surface. In view of this, placing the most critical component, namely the generator, on the seabed is an important part of the Uppsala concept. The buoy, acting as power take-off, is a robust, cheap, and insensitive component, and together with the line it is the only part of the energy system directly affected by the extreme mechanical forces of the ocean surface. To prevent seawater from entering the system, the generator is sealed off from the seawater through a sealing device on top of the generator capsule. The system is designed to work at depths ranging from 20 to 100 m. The wave power system is simple, in the sense that the amount of moving parts and expensive technology is minimized. This reduces the risk for failure and the costs for offshore maintenance.

The wave energy research group at the division of Electricity in Uppsala University continuously aim to study and develop all different aspects of wave energy, ranging from power systems and generators, including performance studies of different subsystems, to resource studies, hydrodynamic modelling and the environmental impact of wave energy farms.

The research is divided into several projects with various activities.

The Lysekil project and the Swedish west coast activities

The wave climate is characterized by a wave measuring buoy, operating since 2004 to continuously measure the waves, and thus the wave energy content at the site. The first full-scale wave energy conversion device by Uppsala University was installed in 2006. Since then, a large number of wave energy generators, buoys, marine substations and various wave energy technology has been deployed and studied in a long series of experiments at the test site. Recently the test site has approved for a larger area and opened for other research groups to conduct their experiments in parallel, under the leadership of Uppsala University. The test site is connected to the local grid via a 1 kV sea cable to the measurement cabin at the island Härmanö.

The project aims to map the conditions for offshore-based wave energy conversion technology in Swedish seawaters with respect to a variety of selected parameters, such as wave climate, seasonal ice conditions, water level fluctuations, sea depths, conditions on the seabed, regional environmental factors, protected and regulated areas etc. The technical wave power potential is predicted in various scenarios established through large park simulations of generic wave power units of point absorber type through validated time-domain models developed at Uppsala University. The study is conducted in high-resolution and the most favourable zones for establishment of wave power will be identified.

The project aims to develop, test, verify and evaluate cost-effective and sustainable solutions for dynamic sealing systems with linear reciprocating motion in mechanical lead-through transmissions adapted for wave energy conversion (WEC). The project seeks to create improved technical conditions for a long maintenance-free service life and thereby strengthen the economic conditions for the establishment of WEC technology. Developed concepts will be realized in scale models, plasma surface treated and long-term tested during simulation of operating conditions in parallel with measurements of abrasion and leakage. Evaluation will take place through e.g. microscopy and various analysis methods.

Concept concerned in this project is based on energy conversion of the ocean waves via rotational generators. The objective of this research is to develop a new type of slow-motion converter. The focus of this project is, therefore, a new generation of wave power device for utility-scale energy generation offering a cost of energy that can compete with established energy resources.

The goal of the project is to investigate how different installation and maintenance (I&M) strategies impact the cost of generated electricity from marine sources, using metric the Levelized Cost of Energy (LCoE) as a. The project targets companies developing Marine Energy Converters (MECs). I&M of a MEC constitute a large expense for both wave and tidal devices. I&M problems for MECs are not well-addressed in research and industry, perhaps, due to still developing market. Mapping of I&M strategies for MECs with a focus on national developers is carried out, identifying the needs and possible solutions for them. The study will help to reduce I&M time and costs, thus, to maximize the efficiency of the operations and, as a result, to lower the LCoE, facilitating further development of MEC technologies.

DUAL Ports aims to reduce carbon dioxide emissions from ports by examining the possibility of port operating 100% of renewable energy. The project contributes to developing and building up knowledge about a completely renewable system and its operation and is in line with Europe’s and local climate goals. Increased electricity use from renewable energy sources will place other demands on our electricity grid and electricity use. The goal of the project is to create business models aiming to evaluate the possibilities of integrating innovative technology together with renewable energy sources to meet the energy need for the operation of the port in Oostende. It is hoped they will also be applied to other ports in the future. UU’s part of the project is to explore the possibilities of using offshore wind and wave power as a part of the energy supply, to develop and test an energy management system that enables combination of different renewable energy sources to the port’s energy system.

The project measures and computes wave loads on mechanical wave energy components and analyzes the impact on the survivability of the systems. Uncertainties are quantified and the risk for failures in different wave conditions and for different choices of components and design determined. With reliable data and models for survivability, the need for expensive experimental test schemes is reduced and the offshore maintenance and repair costs minimized.

Ocean waves provide a promising source of renewable energy, but no large-scale wave power technology has yet demonstrated high efficiency and competitive costs. The project addresses thise problem with new approaches to modelling and optimizing large-scale wave power systems. A multiple cluster scattering theory will be developed and a collaborative machine learning control method will enhance the performance of the farm, based on promising preliminary work. The model will be combined with state-of-the-art optimization algorithms and economical models to identify efficient and competitive configurations of large-scale conversion of ocean waves to electricity.

Resilience of offshore renewables to extreme wind and wave hazards

Research collaboration within the Centre of Natural Hazards and Disaster Science (CNDS), with the aim to categorize offshore weather hazards (extreme wave and wind conditions) and analyze the resilence of offshore renewable energy systems to extreme wind and wave hazards.

The project investigate how linear generators should be optimized for wave power conversion. Wave power has been developed at Uppsala University since the early 21st century and all of the models have utilized a linear permanent-magnet generator. The project has, among other things, investigated using permanent magnets without rare-earth metals, electromagnetic forces in the air gap of linear generators, the Poynting vector in linear electrical machines, and end effects in linear generators.

In parallel with the technical research and development, studies on effects from wave power on the marine environment have been ongoing since the project started – mainly through studies offshore within the Lysekil project. This has also meant that new monitoring technology has had to be developed and adapted to the needs – such as sets of hydrophones (underwater microphones) and sonar that can collect data for a longer period of time and regardless of weather and wind. Results show that the benthic fauna is affected very little and e.g. crustaceans also seem to benefit. The wave power units emit sound, audible to fish and marine mammals, but not with harmful volumes. Effects of artificial reefs that occur on wave energy converters and buoys are clear and can be seen as positive. Many marine invertebrates attach themselves to the hard parts and form new colonies, small animals and fish find food and protection, which attract larger predatory fish and seals. Even a killer whale has been observed swimming near the wave energy converters, possibly attracted by the seals.

Named under each project above.

Link to the reseach area regarding wave-power at Uppsala University