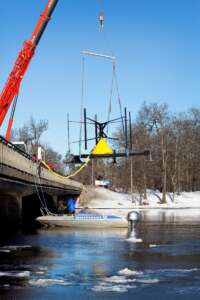 Marine currents in rivers, straights and the oceans is a largely unexploited renewable energy resource with substantial potential. Uppsala University has an experimental facility installed at Söderfors in the Dal river. The facility consists of a vertical axis turbine coupled to a direct drive permanent magnetized generator. The choice of technology provides a simple and robust system with low maintenance needs and minimal environmental impact. The research within the project includes design of the low speed permanent magnetized generator and electrical system as well as the vertical axis turbines that can harness energy efficiently from low speed currents.

The aim is to have power plants that generate electricity with high efficiency at low water speeds. The next step in the research is to further develop the grid connection and to develop and scale up the technology so that it is suitable for tidal applications.

Link to the webpage about Marine currents at Uppsala University