Aging and predictions of Li-ion batteries for vehicle applications 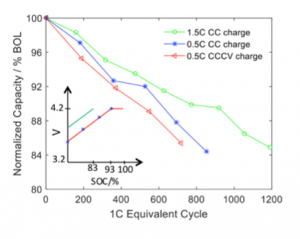 The figure shows that aging varies with the mode charging. In this case NMC/C commercial cylindrical cells charged at high rate (1.5C) but only to 83% Stage of Charge (SOC) were shown to degrade slower than cells charged at lower rate (0.5 C) but to higher SOC. In fact the cells charged to 100 % was the cells degrading fastest. This implies that it is not the rate of charging that probably is the most critical for aging but rather the time at high SOC that ages the cells. However, same type of aging was observed for all cases. Loss of available lithium ions for cycling was the dominating effect of aging, followed by loss of active material in the positive electrode

Electric vehicles are considered a key to reduce carbon dioxide and pollutant emissions from the transport sector. Since a few years back,full electric and hybrid electric vehicles, using high-energy density Li-ion batteries, are available at the market and more vehicles are to come. Compared to batteries for portable electronics, the requirements of vehicles batteries are much higher concerning price, durability, safety and energy and power density. To be able to design suitable battery systems for vehicle applications, more knowledge is needed about the causes to degradation,both to qualitatively understanding degradation mechanisms but also to quantitatively measure rates of degradation as a function of usage conditions. The focus ofthe projectsis to address the aging phenomena arising in large Li-ion vehicle batteries by model studies at well-defined conditions using electrochemical methods.

The main goal is to find methods to electrochemically quantify the effects of usage on aging of the large Li-ion batteries for automotive applications by specifically examininghow the gradients of temperature, pressure, and cycling speed, cycling width and calendar time influences aging of batteries generally and locally, both in small laboratory cells and in commercial, large cells. The ultimate goal is to be able to correlate performance and aging phenomena and mechanisms to cell usage and design, andespecially to obtain aging rates as a function of operating parameters.

We use both commercial cells and laboratory cellsthat haveelectrodes taken from commercial cellsand sometimes purchased electrodes. The cells can be cycled or aged in temperature chambers or in a newly developed cellhouse with controlled pressure and temperature. These cellhouses can also be coupled together, in parallel or in series,and the current distribution can be measured between the cells. The cells are characterized by electrochemical techniques before, during and after aging, in so-called post-mortem analysis. In order to quantify specific limitations in performance and causes to degradation,physics-based modeling can be employed to evaluate the experimental data. The results are also coupled to material analyses of the cell components. Presently five projects cover different aspects of LIB aging, and all are performed in close collaboration within Swedish Electromobility Centre.