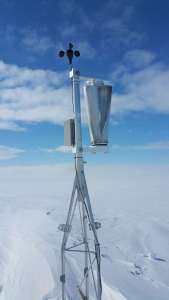 For two weeks, I’ve been living in Deep Field on the Ross Ice Shelf, 78 degrees South in the Antarctica (the red star at the south of the map). We live in tents out in the snow. My main task is to install a little Savonius wind turbine and characterize its function and the radio noise that it emits. Otherwise, I help around at the ARIANNA – a world-leading physics experiment to develop a detector for high-energy cosmic neutrinos. We also have some side projects: a few days ago, we tested a “drill” that is being developed by the European Space Agency to be sent to Enceladus, a snow and ice‑covered moon around Saturn.

The Savonius turbine I’m installing and testing is expected, in the future, to provide energy to the neutrino detectors during the winter season (the polar night). Now, in the summer, the detectors are driven by solar cells. Apart from the climate issues, the requirement that the turbine be silent and not produce any radio noise is a challenge – it musn’t give out even the minor “squeak”…

The weather now is mostly great: sun 24 hrs a day and until now moderate winds; some days even calm like today (Fig 3), with warm temperatures of -10 to -20 C and even up to a few degrees … below zero. We’ve also had some hard weather, with winds up to 20 m/s. The turbine seems to be OK and the analysis of the measurements seem to be checking with our expectations. Inside the tents, it’s nice and warm, especially in the large kitchen/science tent which is over 0 C, and mostly between 3 and 10 C in the middle of the day. Right now it’s up to 11 C, and a few days ago we had a record of 17 C! Cool, considering it’s only the sun, us and a little cooking doing the work. The snow is nothing to complain about either: about 70 m (meters!). 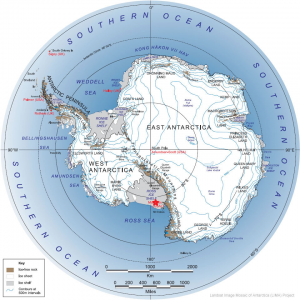